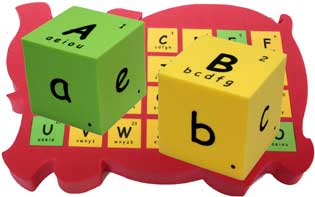 ✓ Each set contains 26 alphabet blocks (one capital letter per block and five different lowercase letters per block), one extra vowel block for each of the vowels, and one dot die.
✓ Each block that has a capital letter also has the lowercase version of that same letters on the same block.
✓ The alphabet blocks, A through Z, are numbered 1 to 26, respectively.
✓ The alphabet blocks use one color for vowels and another color for consonants.
✓ The small black dot in the bottom right corner of the surface of each lowercase letter indicates the right position.
✓ Made in Taiwan; Certified Safe Toy.
✓ Each set includes small-format (9x14cm) flashcards. Corresponding online videos (suitable for both "small-format ABC Fun Cards" and "large-format ABC Fun Cards").
* Products colors may not be exactly as shown. 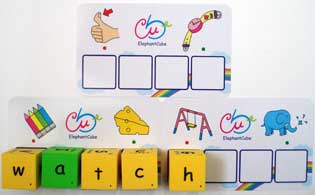